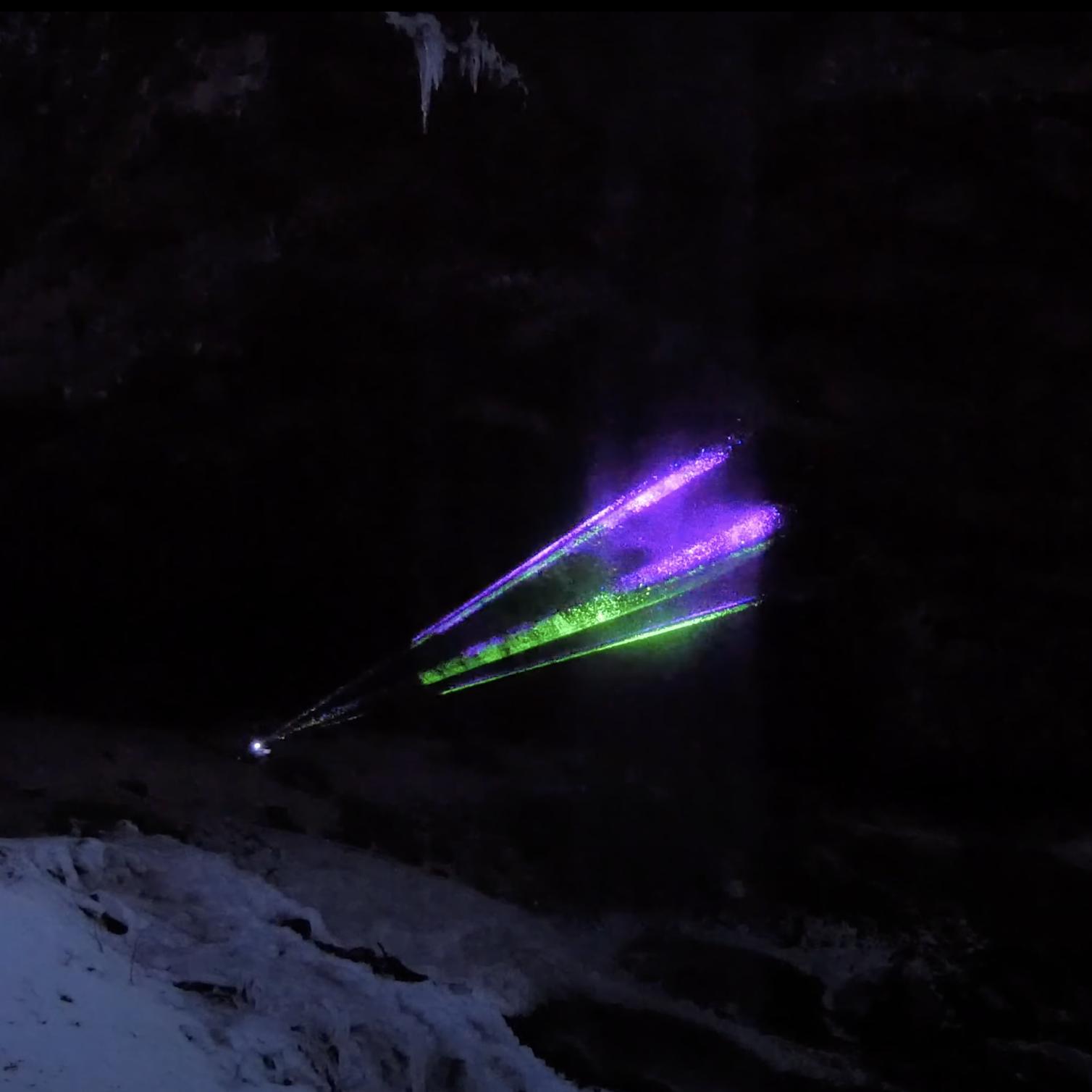 My work involves repurposing found analogue devices to investigate the connections between light and sound in the form of installations and performances. I repair and modify tools from our past to expose the public to the unique qualities of analogue light beams. By using old tools in a new way I encourage the public to reflect on the impact that technology has on our planet: can the ‘old’ still be useful? what value the ‘new’ really adds? Understanding our relationship with technology is fundamental to solve environmental issues generated by planned obsolescence, optimising recycling/reusability, and avoiding overproduction of redundant devices. On this path, I began thinking how to bring more public attention towards our planet using art as a methodology for activism.

In my recent project e//missions I use laser light to direct attention towards locations in nature threatened by the climate crisis as an excuse to talk about the environmental threats that each specific location faces. e//missions aims to draw attention towards the precious natural resources of our planet by using light performance to shed light on the fragility of various ecosystems. I believe that activism can be carried out in a non confrontational way enabling us to have a dialogue about relevant issues, such as the threats of pollution and climate change, which affect us all. To achieve this I think art is a capable yet gentle tool which can ignite a dialogue and spread awareness. Highlighting the beauty rather than the devastation is an effective way of communicating the information while nonetheless inspiring a reaction in the viewer.

Inspired by the work of the early land artists (Michael Heizer, Walter de Maria and Robert Smithson), e//missions was born during the home-confinement pandemic period, with the goal to redirect audience awareness outwards towards nature, highlighting its value and fundamental role for our life on the planet.

I began by exploring my region in the Alps of Italy, shooting laser light onto water streams that are becoming increasingly polluted and scarce. Recently I traveled to project in Bolivia’s unique Uyuni salt desert which is the mining target of several multinationals for the high presence of lithium. Bolivian president Evo Morales already anticipated that Chinese and German companies manifested intention to mine the site for obvious energetic reasons and that would sustain the nation for a long time. Of course this creates a risk of widespread pollution, including the calcination of soil which would put the Salar’s flora and fauna at risk.

Full documentary about the first three e//missions in which I show how the custom hardware system that I developed to reach every location with lightweight transportable gear in a backpack. I can shoot lasers off-grid in the nature for hours while filming. I built my own laser projector to be lighter and more compact than what’s commercially available. I use my own developed software to control it. I’ve been using this technology for the last 10 years.